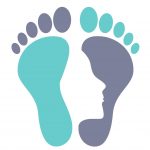 It was reported today that a Powertex tutor has found a rare sarcophagus, whilst gardening, this weekend.

The Sarcophagus, thought to date from the early reign of Pharaoh Tutankhamun, was said to closely resemble a paper mache pencil box which had been coated in black Powertex.

The lower half had very deep ridges similar to corrugated cardboard, whilst the top section had a plaster replica of the famous Tut himself nestled in a bed of 3D flex made into a thick clay again with black Powertex and imprinted with a hardened piece of the corrugated cardboard.

The rear of the sarcophagus seems to have some hieroglyphs in gold as if they had been stamped using the Scarabella/Heiro Heaven stamp sets using easy varnish and gold pigment.

Upon opening the front, the adventurers were surprised to find an intact mummy.

Closer inspection revealed this was a foil form, covered in masking tape and painted with Powertex Ivory.  This had then been wrapped in gauze which had also been dipped in the Ivory Powertex and then sprayed with natural brown bister.

The whole sarcophagus inside and out had been covered with a dusting of Rich Gold pigment.

Archaeological specialists have decline to comment at this time.

For those eagle eyed readers out there – yes the hieroglyphs on the pith helmut do spell Powertex!!

Until next time, happy creative adventures